The Tropezienne Tart, or when God created Brigitte Bardot 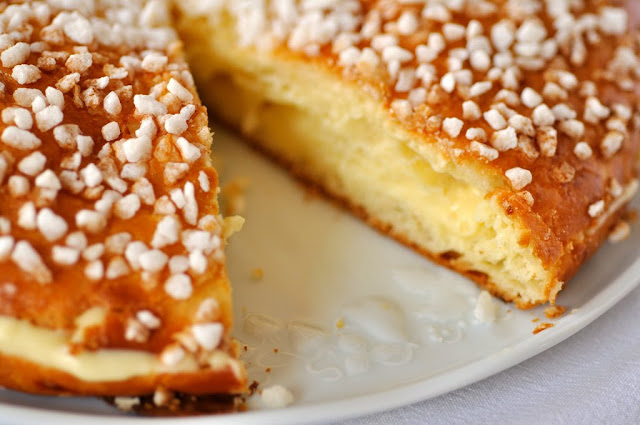 Fashion comes and goes...what was popular once falls into oblivion only to reappear years later with renewed strength... This is the case of Brigitte Bardot and the Tropezienne Tart.
Apparently, this tart was created by a Polish pâtissier, at the times when Roger Vadim started to make a film..."And God created woman..." in St Tropez, starring who was at the time an unknown girl called Brigitte... 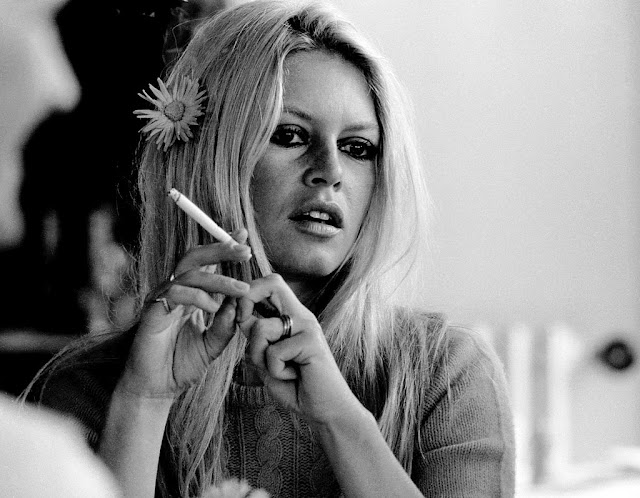 The film crew loved this tart so much that they asked the pâtissier to make one (or several) every day...The film was a hit, the unknown girl became a world sex-symbol.....
And the tart became the symbol of St Tropez !! so it was rebaptised "tarte Tropézienne"....
It is a simple tart, brioche dough plus "crème mousseline" (i.e.: pastry cream  & butter) with sprinkled rock sugar on top....so simple that it becomes unbeatable: imagine the cream oozing out between the layers of brioche...impossible to stop at one bite!
But people had almost forgotten Brigitte (who lives in ostracism in the south of France) and the tart, until this summer one French handbag-maker launched a new model of bag called Bardot, and with it, Brigitte came back into limelight, and the tart too !! 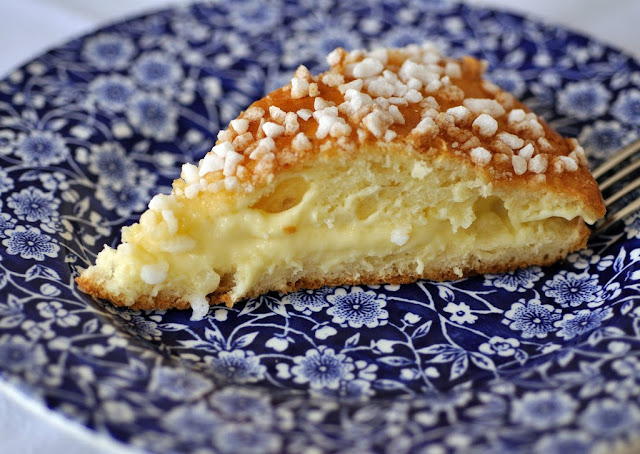 It is THE thing to eat this summer !!! Macarons will be out, if you know what I mean.... 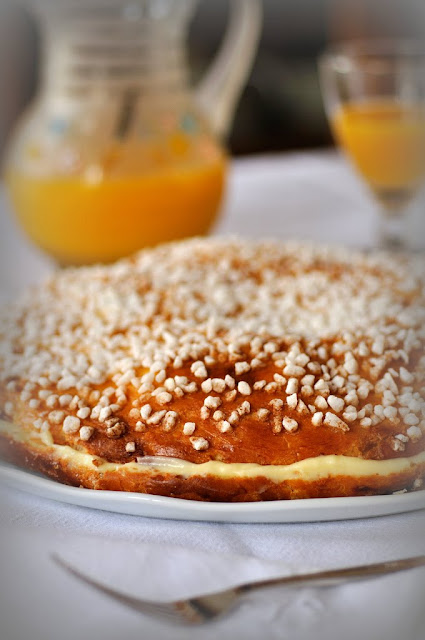 OK, I know what you are going to say..."making "la brioche" is complicated or at least it takes too many hours..." Maybe you have a point there, this is why when I found this "brioche express" recipe by chef Christophe Felder (former pâtissier chef, at Crillon Hotel, Paris), I  decided we could give it a try! 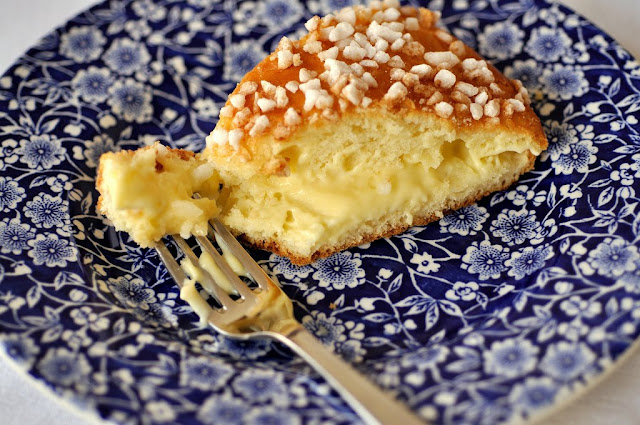 Probably making the true brioche dough is better, but let's admit it, sometimes we don't have the time, or we want to improvise, and late in the morning, we decide surprising our family or friends with this treat for tea-time!
The result?....if you ask my family? "Buenisima!!" (too good!) The proof? Kids and husband arguing about who was entitled to the biggest share...
Does Brigitte still eat this tarte in the solitude of her home? I'm sure she does....
Enjoy it!

To make this Tropezienne Tart, you will need:

(for the egg wash)
* 1 yolk + 1 tablespoon of water
Warning: all the ingredients should be at room temperature!

1. Combine the warm milk, the yeast and the flour, directly in the big bowl of your stand mixer. Pour the 225gr of flour on top of the yeast mixture. Don't mix, don't cover! Set aside, at room temperature, for 1 hour. (you will see some cracks are formed, due to the yeast!). Add the sugar, salt, milk, and the egg. Whisk for 1' with the paddle attachment. Add the 60gr of soft butter and rhum. Whisk first at low speed, then medium for 15'. Because of the high content in butter, this dough is sticky in nature...yet, after  the 15', it should not stick to the sides of the bowl (add some flour if necessary). Put the dough in a bowl, cover it with plastic film. Refrigerate for 30'
2. In the meanwhile (during fermentation time), you can start preparing the cream: put the milk and vanille bean in a saucepan; take it to a boil, infuse for 30'. Remove the bean. In a bowl, whisk the eggs, sugar and cornstarch. Fold in half the milk, combining gently. Put everything back in the saucepan with the remaining milk. Cook medium/low heat until the cream thickens. Turn off the heat. Add the butter, whisk well. Let it cool. Then add the orange flower water. Put the cream in a dish, cover with plastic wrap (making contact with the cream) Refrigerate. When the cream is cold, take it out of the fridge, whisk it gently and add the cold whipped cream. Refrigerate again (always covering with plastic wrap)
3. Flour your table top. With the help of a rolling pin (floured) shape the dough into a circle of 22cm diameter. Place it on a buttered and floured baking sheet. Cover with a clean piece of cloth. Let it rise for 45' at room temperature. Pre-heat your oven at 175°C. Brush the dough with the egg wash. Sprinkle rock sugar on top. Bake for 20'. Warning: the brioche should not get too dark (cover with aluminum foil if necessary) Do not over-cook the brioche, otherwise it will turn too dry! Let the tart cool on a wire rack. Cut the brioche in half horinzontally. Spread the cream on the bottom layer, cover with the other. Refrigerate until served.
PS: Mrs Bardot's photo does not belong to me, obviously, but since I found the same photo in several people's Flickr photostream, I could not ascertain the real author of the photo. In any case, whoever it was..Thanks !!! Incredible picture!!

Maria said…
This looks absolutely fantastic! I love you blog, it's my first time reading it. Can't wait to try this out soon! Thanks!
August 3, 2010 at 9:14 AM

Unknown said…
Daaaaahling, I think macarons went out when the Parisian McDonalds started making them. I will always still love Laduree though.
Beautiful tart. I have never heard of it before, and I love the story behind it.
*kisses* HH
August 3, 2010 at 9:56 AM

Magic of Spice said…
Oh this is so divine, makes me feel romantic...and what a great post:) My French heritage is screaming at me. Saved and will be attempted, but never matched-perfect!
August 3, 2010 at 9:59 AM

Unknown said…
romantic was a great word to use for this recipe and blog post. I loved reading it, the pictures and the recipe looks wonderful!
August 3, 2010 at 2:06 PM

bunkycooks said…
This is just beautiful! I almost feel like I am in France seeing this. Lovely photos as always!
August 3, 2010 at 3:26 PM

Claudia said…
Kudos for fast brioche. I don't mind shortcuts. By all means - nudge that tart back into fashion - so divine and oo la la like a certain Brigitte. And can we bring her body back into fashion? Can women have curves again?
August 3, 2010 at 4:23 PM

Charisse said…
This looks so decadent! I wish I had some right now! It was definitely worth the time it took to make it!
August 3, 2010 at 5:43 PM

Evan @swEEts said…
Oh my goodness.. this looks delicious.. brioche is something on my list of things to try to make soon and this would make the experience even tastier!
August 3, 2010 at 9:02 PM

Je m'appelle Cynthia said…
Delightful - I've learned something new today. I wondered what the simple treat was - and then I saw the cream inside. Beautifully photographed and a lovely story as well. Bravo!
August 3, 2010 at 9:20 PM

sensiblecooking said…
That was great story about the tart but the whole time i was just staring at the tart. It looks so good. I am not good at baking anything but I am atleast trying this before quitting.
August 3, 2010 at 9:53 PM

Unknown said…
Lovely story with a beautiful tart, thanks for the little visit to France!
August 4, 2010 at 12:59 AM

Chef Dennis Littley said…
that tart looks incredible!! I have been to St Tropez, but I certainly didn't see anything like that!! the texture, colour and that lovely cream just look perfect!!
August 4, 2010 at 3:11 AM

Lynn @ I'll Have What She's Having said…
I once attempted the Brioche Tart that made Julia Childs cry tears of joy. It make me cry tears of brioche making frustration. Express brioche is something I can get behind!
August 4, 2010 at 3:44 AM

Stella said…
Cristina, this tart looks amazing. I can completely understand the film crew wanting a couple of these made daily. This must have been a wonderful treat for them on their much needed coffee breaks. Mmmm, Tropezienne tart with rich, hot coffee! Yum...
p.s. Cauldron Boy wants me to make this-stat (smile).
p.s.s. Your photos made my stomach growl. That's food photography success if you ask me!
August 4, 2010 at 4:24 AM

fromBAtoParis said…
@ Chef Dennis: What a compliment !!! Thanks!!

A SPICY PERSPECTIVE said…
What a great write up! I love old glamorous black and white photos. And the tart, oh my. I think I would want to order several a day too...just for me!
August 4, 2010 at 2:30 PM

marla {family fresh cooking} said…
This is my first visit to your blog. It is gorgeous and this tart looks amazing. If I eat these tarts will I look like Brigitte?? lol
August 4, 2010 at 4:55 PM

tasteofbeirut said…
This is by far my favorite French viennoiserie, but I had no idea it was inspired by no less than BB!!!
unbelievable, but she was so beautiful, I am not surprised; this is a great recipe, Christophe Felder can be trusted, un grand merci~
August 4, 2010 at 5:59 PM

Unknown said…
Cristina, I want to feel like I'm Bardot, so I'm off to make this elegant tart! Before I go, just wanted to let you know that I've presented you with an award at my site, go check it out: http://foodivakitchen.blogspot.com/2010/08/sharing-my-award-giving-one-more.html

fromBAtoParis said…
@ Subterfuge Diva: Oh, thanks a lot Maya !!! I feel so honoured to be surrounded by so much talent !!
You made me laugh: I'm far from being famous...more like a little ant in this blogger's world but the most important thing is I enjoy every minute of it !!
Thanks again for so much kindness !!
August 5, 2010 at 10:04 AM

the constant hunger said…
Wow. What a beautiful story and photos. I absolutely love your blog!
August 5, 2010 at 2:19 PM

denise @ quickies on the dinner table said…
Eeeeeek!! I ADORE Bardot!! I have a cocktail on my blog named in her honour! The brioche tart looks wonderful - I am addicted to sucre perle and love brioche, so I am already thinking of making something like this, if not the exact thing!

Roadtrek Girl said…
I love reading your blog, your writing is so witty and interesting and your photos gorgeous. And then there is the food-magnificent !! Thank you for sharing this recipe -I plan on making it this weekend.
Sandy
August 7, 2010 at 12:38 AM

Wheels and Lollipops said…
When I first came to France 8 years ago, I went down to visit friends in St Tropez and this dessert was served with champagne (rosé), the dessert, surroundings are all etched in my memory as a perfect summer evening. Thanks for the memory trip :)
August 7, 2010 at 3:22 PM

Jessica said…
Delicious! I loved your post. It's very interesting to learn the history behind some of our favorite recipes!

Celine said…
thanks for the recipe!!

i've tried to find a recipe, but they requiered so much butter...

Found this recipe cos I need to use up 2 litres of fresh cream- this looks divine and I'm such a big fan of brioche so the combination is perfect! Love the blog too! I'll let you know how my tart tropezienne turns out! :)
August 26, 2010 at 4:06 AM 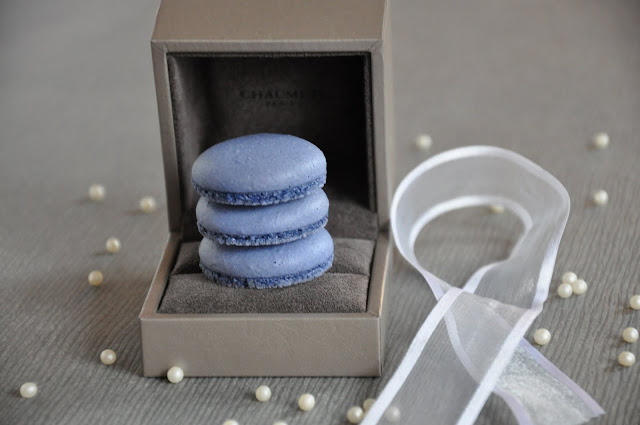 How to make macarons... //My macaron nightmare 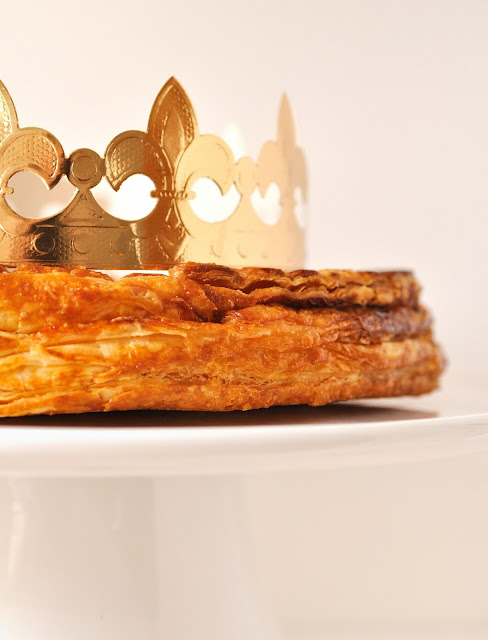